Counting of votes polled in the Tamil Nadu Assembly election held on April 6 commenced on Sunday across the State amid tight security and in tune with fresh COVID-19 guidelines.

Here are the latest updates from Tamil Nadu. For live updates on results of the other elections, follow Assam | Kerala | Puducherry | West Bengal.

DMK leader M.K. Stalin leads with a margin of 3,697 votes at the end of second round in Kolathur constituency.

Tamil Nadu people are keen on a change and the performance of the DMK-led alliance will exceed the predictions and the coalition will win all 234 seats, Mr. Stalin had said. He had also called upon partymen and cadres of alliance parties not to crowd near counting centres to celebrate the victory when the results are out.

Congress is leading in Kanyakumari Lok Sabha bypoll. Actor turned politician Vijay Vasanth is the Congress candidate. He is the son of H. Vasanthakumar who defeated former Minister Pon Radhakrishnan in the 2019 Lok Sabha elections. Vasanthakumar succumbed to COVID-19, due to which byelections were necessitated.

Mr. Kamal Haasan, during his campaign, attacked both the DMK and the AIADMK, alleging that they were “corrupt” and there was little difference between them. He is hoping to lead a third front.

Click on the right arrow to go through our gallery

Early trends indicated an edge for the DMK with the ruling AIADMK following behind and key leaders of both the fronts were leading in their respective segments.

About an hour following commencement of counting of votes, Tamil Nadu Chief Minister K. Palaniswami was leading in his home segment of Edappadi in Salem district and leader of opposition and DMK president M.K. Stalin was ahead in Kolathur constituency here.

While the DMK combine was ahead in 30 segments, the AIADMK was leading in at least 18 constituencies.

Indications showed that the DMK was ahead in constituencies including Kurinjipadi, Neyveli, Virudhachalam.

BJP’s State unit chief L. Murugan was ahead in Dharapuram and AIADMK leaders and State Ministers K.C. Veeramani and Benjamin were ahead in Jolarpet and Maduravoyal.

In most of the Assembly constituencies in southern districts of Tamil Nadu, counting of postal votes started on a brisk note. Early trends indicated that apart from the DMK and the AIADMK, Congress and BJP candidates too have polled sizable votes.

DMK was leading in Dindigul district, while AIADMK was marginally ahead in Theni, Sivaganga districts. – L. Srikrishna

Minor scuffle in counting centre in Virudhunagar district as AIADMK candidate for Aruppukottai AC, Vaigaichelvan, by mistake enters in counting hall for Sattur AC. AMMK counting agent’s shirt torn after a fisticuff between the AIADMK and AMMK agents

Periyasamy, counting superintendent, Thiruvaiyaru Constituency, fainted at the counting hall when the counting process was about to commence.

He was immediately rushed to the Thanjavur Medical College Hospital for treatment.

Nearly 4,000 candidates in the fray

3,998 candidates are in the fray, including top AIADMK leaders, Chief Minister K. Palaniswami and Deputy Chief Minister O. Panneerselvam, DMK president M.K. Stalin and his son and party youth wing secretary, Udhayanidhi Stalin, who is seeking to enter the Assembly for the first time.

The votes recorded in EVMs would be taken up by 8.30 a.m. and it is also set to be tallied as per rules with Voter-Verifiable Paper Audit Trail (VVPAT). 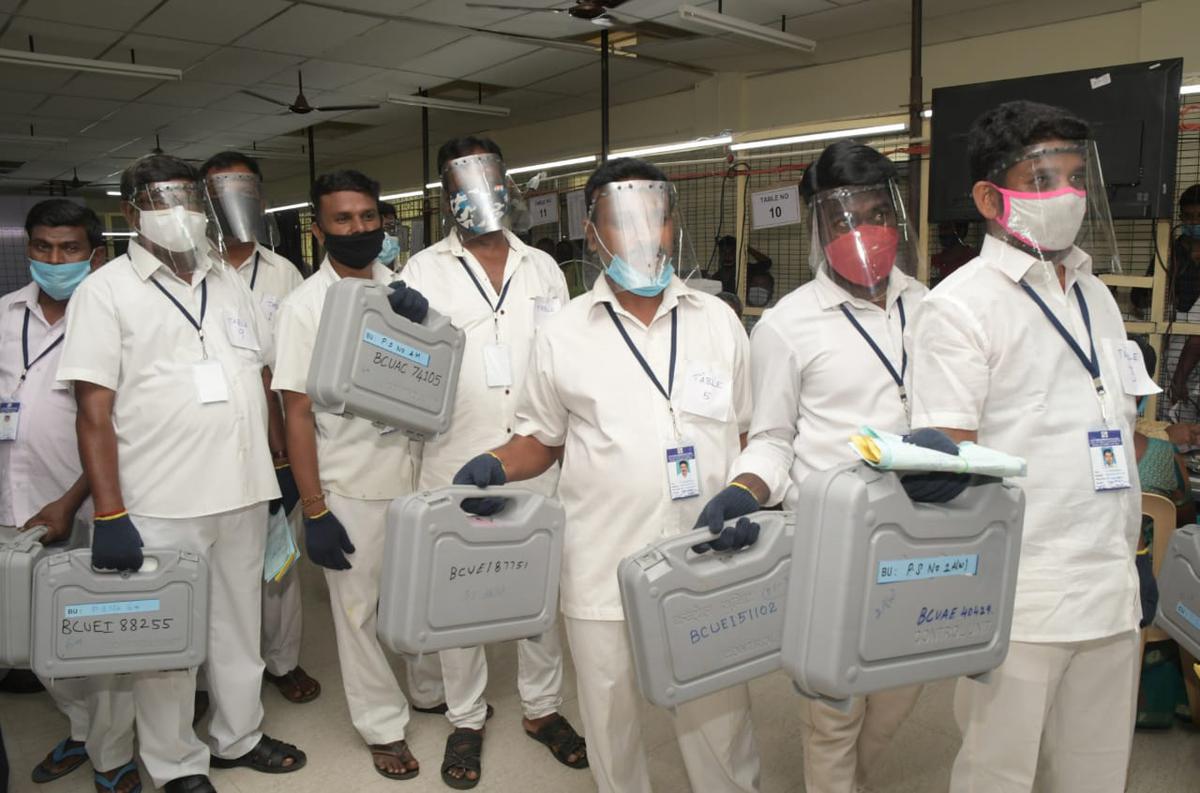 Control units being taken from the strong room to counting hall at the Institute of Road and Transport Technology at Chithode in Erode in Tamil Nadu on Sunday.
| Photo Credit: M. GOVARTHAN

Counting agents were allowed through specified pathways into counting halls after verifying if they have complied with norms like RT-PCR tests and two doses of COVID-19 vaccination.

Sunday being a complete lockdown in Tamil Nadu to help prevent the spread of coronavirus, the roads were deserted and over one lakh police personnel have been deployed as part of security measures for the vote counting day.

Polls were held to 234 constituencies in Tamil Nadu and by-election was also held to the Kanyakumari Lok Sabha seat, where Congress party’s Vijay Vasanth and BJP leader Pon. Radhakrishnan are the key candidates.

The overall political scenario in Tamil Nadu was electrified due to the multi-cornered contests.

Referring to the incidents that occurred during the visit of Uttar Pradesh Chief Minister to Coimbatore on March 31, 2021, and the murder of two Dalits at Somanur near Arakkonam in Ranipet district on April 2, 2021, the DGP’s office instructed police officers to strengthen security arrangements in vulnerable places not only in both these districts but its adjoining areas that witnessed caste/communal violence in the recent past.

The police were also told to keep a vigil in Thoothukudi district where protesters had planned to organise agitations against Sterlite being allowed to open its facility for manufacturing Oxygen. – S. Vijay Kumar 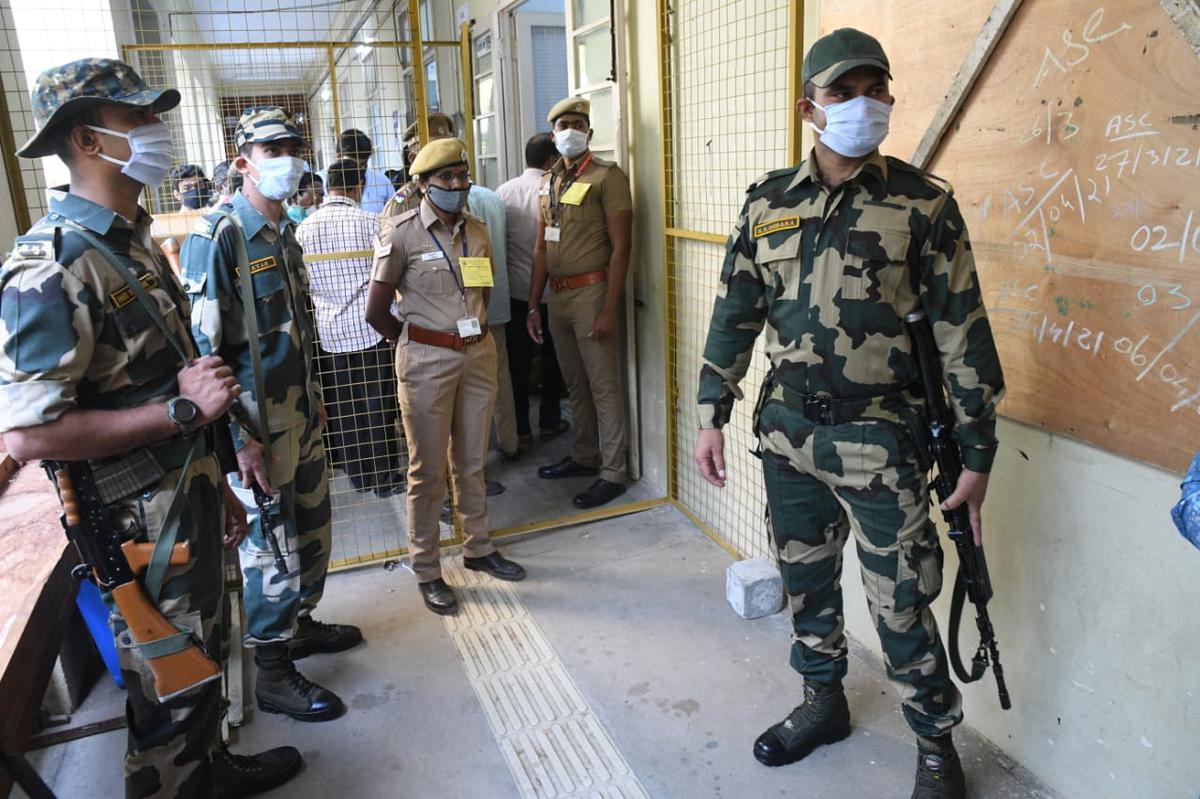 Security personnel keeping a vigil at the Government College of Technology, a counting centre for the Assembly elections in Coimbatore on May 2, 2021.
| Photo Credit: M. Periasamy

Counting of votes began for 234 Assembly constituencies in Tamil Nadu with thousands of police personnel, including companies of Central Armed Police Forces (CAPF), deployed at heavily guarded counting centres across the State.

Election officials, candidates, their agents and other authorised persons were allowed to enter the counting centres as per the Standard Operating Procedure prescribed by the Election Commission and the Health Department to curb the spread of COVID-19. The counting of postal ballots commenced first.

In a note to all senior police officers, the State police headquarters said though the campaign and polling passed off peacefully without any incident, the situation remained tense during the pre-election scenario due to various communal and political issues. – S. Vijay Kumar

Counting of votes polled in Karur, Krishnarayapuram, Kulithalai and Aravakurichi has begun at M. Kumarasamy College of Engineering on the outskirts of Karur, amid tight security in and around the counting centre. – C. Jaishankar The counting of votes began at 8 a.m. in 75 counting centres spread across the State with authorities taking up a count of postal ballots first, authorities said.

Counting of votes for the 16th Assembly election in Tamil Nadu will begin at 8 a.m. amid a stringent COVID-19 protocol and heavy security. Votes polled in the byelection to the Kanniyakumari Lok Sabha constituency will also be counted.

The counting will take place at 75 centres. The postal ballots will be counted first before the votes polled in the EVMs are taken up. There will be a minimum of 14 tables in each counting hall, with a maximum of 43 rounds. Three constituencies — Pallavaram, Chengalpattu and Tambaram — will have more than 40 rounds. The number of tables will also be more than 14 in some of the larger constituencies, according to the data provided by the Election Commission. There will be a total of 3,372 tables and 6,213 rounds (in all 234 constituencies).

After being out of power for 10 years, the DMK hopes to be back in the saddle in T.N. Meanwhile, there is a search for new alignments in both States. The fragmentation of Dravidian politics, following the passing of Jayalalithaa of the AIADMK and M. Karunanidhi of the DMK, has opened up possibilities. Actor-turned politician Kamal Haasan and film-maker and Tamil nationalist Seeman also fancy their chances as they jostle for space in the changed scenario. Though the BJP is far from gaining a foothold in either State, its looming influence is evident in the resonance of religious appeals in the public sphere.

In Tamil Nadu, all exit polls are pointing at one direction — an emphatic comeback of the DMK bringing M.K. Stalin, heir of Karunanidhi in Chief Minister’s seat. Read more

DMK president M.K. Stalin on Friday called upon partymen and cadres of alliance parties not to crowd near counting centres to celebrate the victory when the results of the Assembly election come out on Sunday.

In T.N., the DMK sought to give itself a makeover as a party not antithetical to customs and traditions. In the rivalry between the Dravidian camps in T.N., the Congress used to be the swing power. Whether it retains that role is to be seen. Read Editorial

Take a look at our chart showing the turnout (in %) in the past 10 elections in Tamil Nadu, coloured according to winning coalition. Read more

(With inputs from Correspondents, Agencies)